Deprecated: The each() function is deprecated. This message will be suppressed on further calls in /home/holaawmp/public_html/wp-content/plugins/js_composer/include/classes/core/class-vc-mapper.php on line 111
 Querying the cloak, Queering the solution: Dealing with violence and abuse in our own feminist spaces - HOLAAfrica!

Querying the cloak, Queering the solution: Dealing with violence and abuse in our own feminist spaces 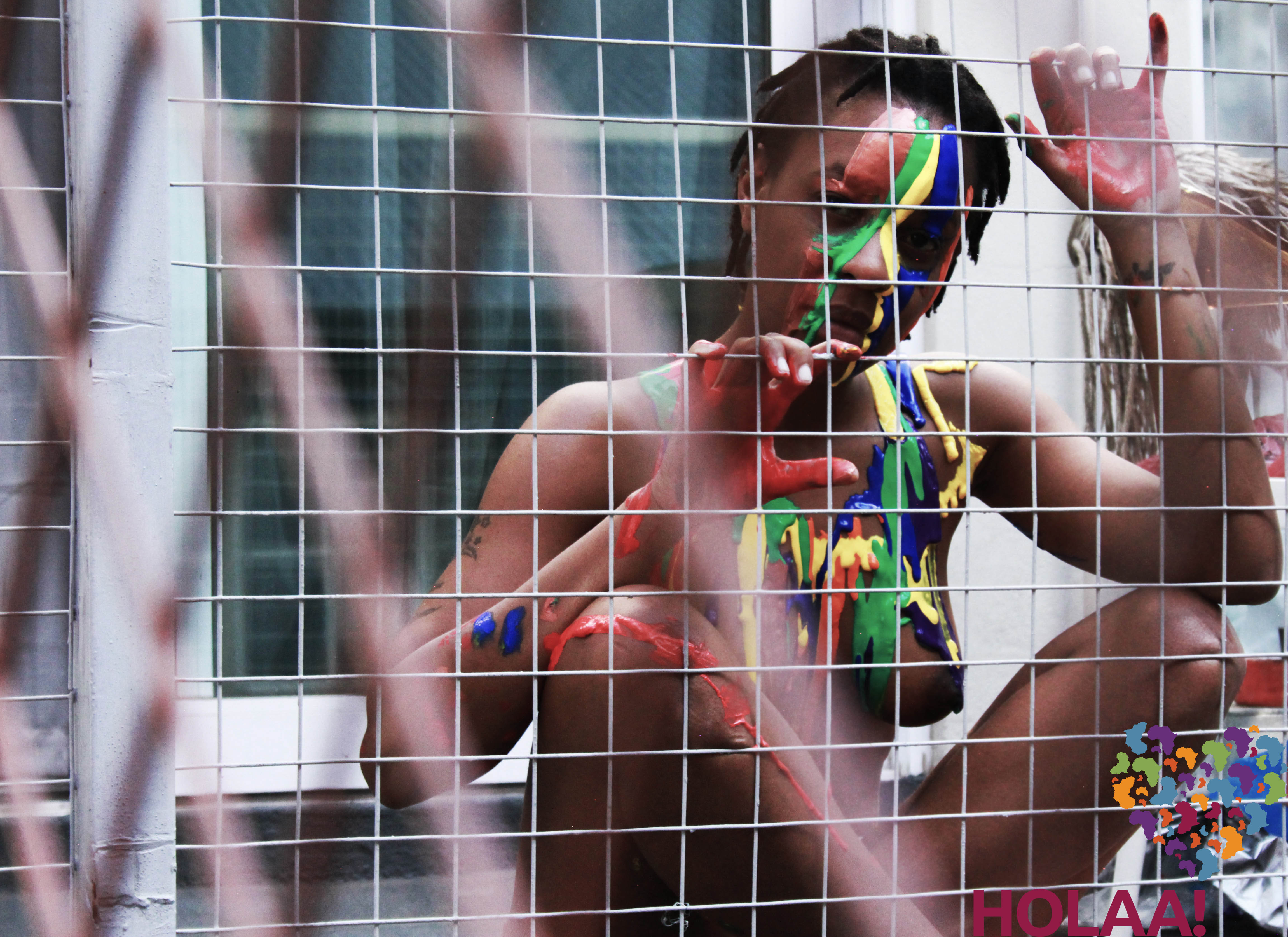 Energy is a powerful fucking thing.

Your thoughts are a powerful fucking thing.

Whatever you spend both on is what you will attract. I have been spending my thoughts and energy on a very painful, confusing, hard and complicated topic these last couple of months. I have been spending my time and energy on trying to understand and find solutions for violence in queer relationships, spaces and movements and in the time I have spent on this I have witnessed and heard of so many cases. I wish that if I stopped spending thought and energy on this it would go away, unfortunately that’s not how it works.

And that’s actually one of our biggest problems, that we think burying our head in the sand is going to make it all go away.

The first time I heard about intimate partner violence between a queer couple I was shocked. My partner was relaying a story of a couple friend of hers and the problems they had incurred in their relationship. Now a good majority of the queer people I have met are what we call paid feminist activists, employed by NGOs to do the work of securing the rights, autonomy and freedom of women, black people and the LGBTIQ community. At first I assumed that everyone who formed part of the LGBTIQ community was aware of the patriarchy and the violence incurred by black people, women, poor people, people with disabilities and indeed queer people as a result of a system that demands how we should behave and be treated based on the bodies in which we are born. I couldn’t understand how it was possible that there was intimate partner violence in LGBTIQ relationships when we were all supposed to ‘know better’. A couple of years have passed since I heard about this incident and since I have been a paid activist. The rose tinted glasses have long fallen off and I am no longer naive to the sometimes brutal contexts in which we organise. Brutal in terms of the outside oppressions we fight on the daily, but also brutal in terms of the interpersonal, political and organisational dynamics that exist between activists and between the organisations we work for, believe in and are often so passionate about.

Queer folk, activists and feminists, whether we like it or not, are a direct product of the patriarchal environments we were born and raised in. Our circumstances are what have led us to activism but sometimes those circumstances cling onto us in ways that are counterproductive to the revolution that we are trying to realise. Violence is one of those nasty smells that we can’t seem to wash out.

When squad is the problem and abuser

We have done really great work in the fight against gender-based violence (GBV), both on a legal and policy level and on a social one. Granted we have a very long way to go in terms of making sure laws on GBV reach people on the ground but now more than ever women are aware of their rights, aware of the patriarchy, aware of their bodily autonomy, their voice and more and more are coming out and speaking about the violence they have suffered and are doing the work (because that’s exactly what it is) to hold abusers, perpetrators and rapists accountable. We in the movement are big supporters of this, of believing women who have been violated, of supporting their psycho-social and legal needs, of holding these men accountable. We are big supporters…when the big bad wolf is that dude from that other street, that dude on TV, that dude from that political party that those people voted for who supposedly has been running the country for the last god forsaken years.

What happens when the big bad wolf is my fellow activist, my friend, standing right next to me at the marching singing

All of a sudden things get very fucking complicated. And get complicated they most certainly should.

Feminism 101 tells us that objectivity is a faas*, human existence is complex and our feelings matter. So when you are told that your fellow activist, feminist sister, queer, friend and even just someone who’s work you deeply respect is an abuser there is immediately a ‘system error, cannot compute’. Abusers are bad people, other people, people out there, not people in our movement. Except they’re not just people out there, they’re not just strangers! And we know this. We do the work, we know the statistics, we know that more than likely the person who is going to beat you, rape you, assault you, kill you is someone you know, someone you love, someone with which you have a relationship. WE KNOW THIS. But at some point there is a disconnect as we struggle with what we think we know and what we believe our politics to be.

The issue is not how we feel and internally react when we are told, by a survivor or a third party, that someone in the movement has been violent towards their partner, friend, fellow activist etc. Like I said we are human beings, flawed, and its near impossible to initially divorce yourself from your love/respect for a person and to really hear someone when they tell you their story of violence from said person. And that is fine. Its ok to battle, to feel pain, to struggle. The problem comes with what we do with when as activists, a person tells us that someone we know has abused them, raped them, assaulted them. Often we do absolutely nothing.

Oh wait that is not entirely true.

What we do is to offer a half hearted ‘I’m so sorry this has happened to you my love‘.

We very carefully and underhandedly ask them if they are really sure of what they are accusing so and so of, because we know our politics dictate that we believe survivors without question but in this case, we have to make sure you know.

If the survivor sticks to their story we find a way to silence them ‘but sweety, what really can be done? You know the power so and so holds in this movement. Maybe it’s best if we just deal with it on our own. Karma will get them eventually’

And when we have effectively swept the matter under the proverbial rug we continue to freely and happily associate with abusers, we hire them, we hire them to run anti-violence campaigns, we invite them to give talks, to take pictures, to run media campaigns. And we tell the survivor, fuck you, you don’t matter. You person who has experienced violence does not matter more than a movement about the eradication of violence.

What are the solutions?

Effectively what we are doing is invalidating every single thing we have done to uproot violence and patriarchy in our communities, in this country and on the continent.

A central tenet of my politics, my activism and I know the politics and activism of many of the soldiers of this movement is that Black womxn and gender-non conforming people are at the centre of our analysis and actions. We do what we do mainly for the love of these bodies. It cannot be an option to excommunicate and shun the very people we claim to be down in the trenches for, even when these people are the abusers. Our analysis is sophisticated and nuanced enough to understand the lives of Black womxn and gender non-conforming people and to understand how repeated and systematic violence and structures of patriarchy have very literally fucked us up. But we cannot stop here maqabane **. We cannot understand where the violence stems from and then turn a blind eye and allow it to continue to happen again at the expense of other Black womxn and gender non-conforming bodies. Akukhonakali***.

Effectively what we are doing is invalidating every single thing we have done to uproot violence and patriarchy in our communities, in this country and on the continent. We cannot ask society to change their views on gender and gender roles; we cannot ask the world to finally see and acknowledge the trash that is men and violent masculinities; we cannot ask the ANC to hold Zuma, one of their own, accountable.  We cannot ask people to awaken to the treachery of patriarchy; we cannot ask anyone to do anything towards the realisation of our freedom and autonomy when we allow patriarchy to run amok in our own backyards.

We can’t believe in and want a non-violent, free and autonomous existence only when it is easier and suitable for us to fight for it. We cannot continue to allow abusers in our movement to go on unchallenged, covered by the silences we have created and perpetuated, to not be held accountable for their actions. There is no love in this, not for the abuser, not for ourselves and certainly not for those of us who have been at the receiving end of their violence.

To listen to Amanda read this here is the Sound cloud.

For all the articles and pieces on #QueeringTheCloak (our series on abuse and violence in queer women communities) click here.

There is so much information out there such as an article on 11 Signs You Are being Gaslight in a relationship and another 10 things the author learned from someone using gaslighting as an abuse tactic.  There is also another piece on how to support a victim of woman on woman sexual assault. For more on supporting people here is a piece on supporting someone in abusive relationship and also a piece where the woman says At least she didn’t hit me”. There is also a piece by a woman who writes a letter to her ex abuser’s new girlfriend. Also some healing words for after the relationship is done.  There is also this piece about the theatre piece we did on the topic and another story entitled Wanja about a woman who leaves an abusive relationship. There is also this one about missing your abuser.

Want some on feminism and assault here is one called The Silence When She Assaulted Me and one on how to deal with abuse in feminist spaces.

Amanda Hodgeson
Anything and everything I do comes from a place of blackness, queerness, feminism and most importantly love :) All round badass and lover of words, written and read. Check out Amanda on IG: manda_hodge
https://autonomeee.wordpress.com/
Don't Miss It

HOLAA Loves: Ted Talk - How to have a healthier, positive relationship to sex