Speaking our Sex: A reflection on the #PleaseHer safe sex and pleasure workshop in Lesotho 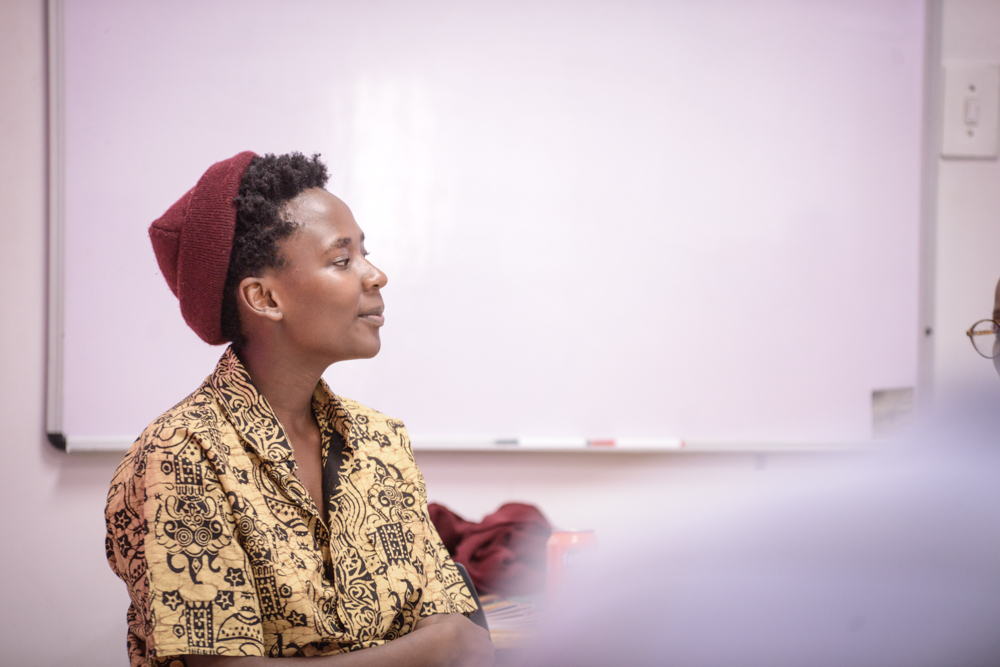 Our throats and that of our mothers house silence. Sometimes they open up to berate women that speak of their sex loudly or the ones that refuse to have children but they rarely open up to talk about it in intentional jubilation or interrogation.

We often bat our eyes quickly and look away during soapie time when the kiss lingers long enough for hands to slide under shirts. Long enough for breathing to ascend and a rhythm is built. There are days though we and our mouths unlearn silence, and we open up and welcome uncomfortable grins and eyes to lodge on our faces when daring human beings shake us into having conversations with ourselves perhaps in the confines of our journals, with sister-friends, or like Siphumeze of HOLAAfrica probed me and about 30 other lesbian, bisexual and queer women to sit and talk about Safe Sex and Pleasure in a hall in downtown Maseru on an airy Saturday.

An hour before the conversation I was looking for shoes other than my blue favourite ones which I ended up wearing. I wore my hand -me-down mum jeans, a thrift find shirt and a maroon hat just to confuse the enemy. Somehow I lost track of time – as I usually do, and ended up leaving the house at 1145hrs,15 minutes before the conversation was scheduled to start. When I arrived after gently rushing the cab driver, the conversation hadn’t started.  Thanks Lorde.

There were only three participants: Leila, Meri and Agnes and the superhero that is ausi Papali, people who made the space for me, people I knew which was something I needed.

Hugs happened. Nervousness and excitement were shared. Then final sitting arrangements were made. Soon thereafter a couple of women started gliding in with apprehensive looks on their faces and gritted teeth. As if the somersaults my intestines were doing were not enough, Tiff and Siphumeze, the ladies that had stole my breath away the day before, arrived late in all  their glory and queer majesty. This is the point where I start talking about how glorious women are. How gut kickingly beautiful queer women are but I shan’t digress. 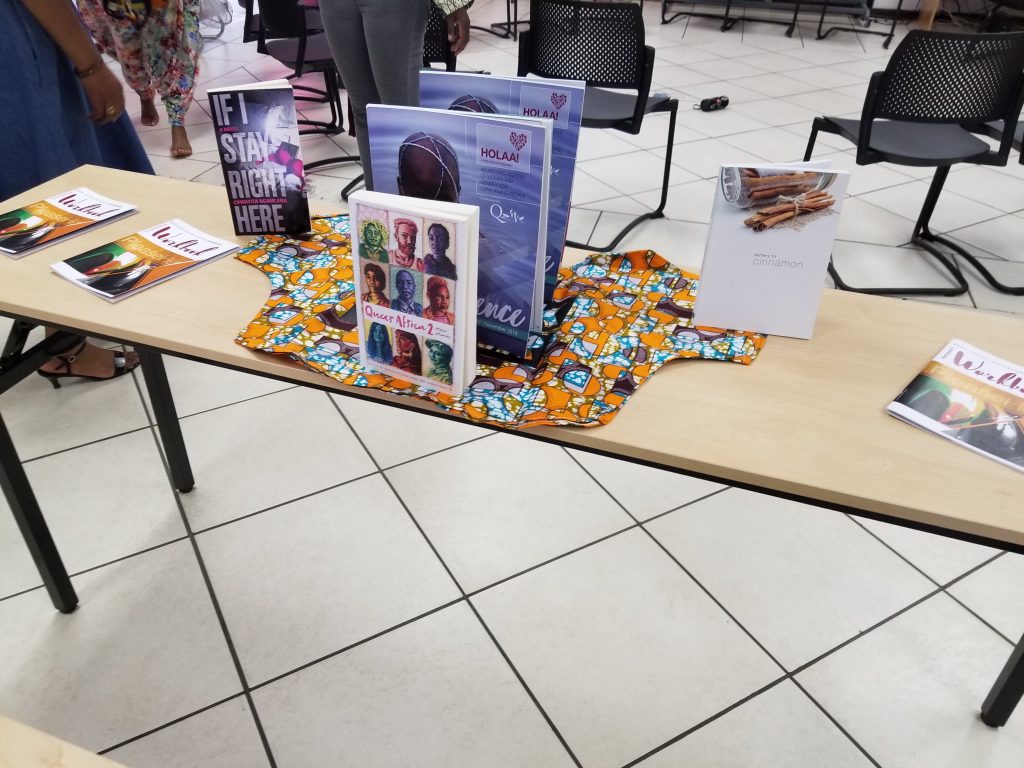 [Editor’s Note: getting a ride to the place was deep, Uber does not exist in Maseru so it’s not technically our fault we were late. But we made it.]

A few minutes passed allowing for two lucky tables to be dressed with books that had me and other book lovers drooling. At this point I still could not grasp the magnitude and importance of the conversation that was to be held in that hall was and its necessity. Finally after what seemed like forever, the other participants were ushered in by Leila’s adorable, weird, nerdy smile and my high pitched hellos. Somehow silence slid in with them and it cleverly overpowered the beautiful music Siphumeze was playing.

Tension and nervousness clouded the room.

Maybe this was because of the discussion point.

It was possibly because of the discomfort that ensues when the culture of silence is dismantled and undone more so on safe sex for those who may be regarded as not the ideal through the lens of heterosexuality and heteronormativity. A few conversations started and giggles sprouted amongst the seated participants but they were soon drowned when wide eyed and quirky Tiff stood in front of us to welcome everyone and affirming the importance of what would follow being conversational, and not a top to bottom dissemination of information.

Kicking the convo off

There was a lot of ice in the room that needed breaking and Siphumeze proposed that we thaw it out using a game that forced all of us to introduce ourselves with a pinch of hooliganism. Laughter and loose giggles filled the room. “I want to know why you came here today.” Siphumeze paused and surveyed the room for answers. She was met with shy stares and some willing faces. She continued, “what made you say, yes, I’ll go. What do you want to leave this conversation with?” Hands shot up and people told their truths. One participant confidently said she wanted to know how to please a woman. Another cleverly asked whether safe sex is fun and in what was possibly the most “controversial” statement of the day, a participant wanted to talk about threesomes and how to initiate a threesome.  One participant said that  she wanted to learn how to kiss.  Watching queer women talk so openly about pleasure and debunk the myth that African women don’t love sex shook me. I watched as each of them opened up and shared pieces of themselves that would otherwise be cloaked under silence.

After setting the days objectives, myths were dismantled. What I enjoyed most about this segment was how much it reassured me. Internalized oppression which sometimes stems from myths is a very sneaky monster that greatly influences how we move through the world. Therefore when we interrogated queer pleasure politics, how misogyny has made us believe that women that speak about their sex and enjoy sex are hoes, I swear Audre Lorde was dancing. Here were African women, in Lesotho talking about the erotic, taking space and writing themselves into time in ways that affirmed the way their hearts work and their desires. We were no longer looking at the floor for answers. Instead we dug inside ourselves and validated our existence whenever we laughed and were queer out loud.

I really can’t recall how we ended up talking about masturbation, but it is a given that a conversation about pleasure would lead to talking about flicking the bean. There was a woman that I assumed was older than all of us that told us she had had sexual relations with women when at all girls boarding school. The openness with which she talked about how those sexual relations empowered her to pay attention and pleasure herself had me ‘yaaaas kweening’ and twerking in silence. It also made me think about how necessary it is to create spaces for ourselves as LBTQ and heterosexual women to just talk about sex. To reclaim our fucking time.

Consent is an important discussion point more so in queer spaces because most times the conversation on gender based violence is heteronormative and does not talk about the violence that occurs in queer relationships. Guess what? Issa myth and since we were in the business of busting myths, that one was also busted. Jointly, we discussed our understanding of consent using HOLAAfrica’s consent flow chart.

Blood boiled when we got to the point that people can and are allowed to say no at any point before and during sex. One human being who had experienced several nos during foreplay loudly told us that that was not fair. She spoke with conviction about the emotional stir that ensues upon hearing that a person no longer wants to engage in sex with you. How being rejected especially during what is one of her most vulnerable times felt like a kick in the gut. After a few back and forths discussing the emotionality of sex, respecting and understanding bodily autonomy and choices, we concluded that people are indeed allowed to change their minds and say no. That dismissing and ignoring their no and having sex with them was rape.

An intermission and snacks later, delicacies (read lubricants, vibrators -one was waterproof, a cute crop top and books) that the HOLAA team brought were raffled out. This segment was stressful. Very stressful. The possibility of going home without one of those books caused my young nerd heart so much distress. But, my ancestors came through and did the things that made me to go home with Queer Africa 2 to happen.

The conversation was then sealed with wine, hugs and more laughter.

I stood in a corner and soaked in what had just happened and how pivotal it was in making me a bit more relentless to create spaces and to live my truth. In as much as these few paragraphs do not fully encapsulate the day’s events, it was indeed a great day to be submerged in queer magic and energy.

We also had an entire storify for our #PleaseHerLesotho for more on our other workshops check out the what we did in Botswana or even Namibia, or the rest of the work we have done with the #PleaseHer initiative here.

Some tweets from the time

Some laughs were had and some wisdom shared. Currently wrapping up the #PleaseHerLesotho #PleaseHer workshop pic.twitter.com/Bs9mGmb42f

Young women do need the sensitization that comes wrapped in ideas of owning ones body and being able to have agency and speak out when this is violated.#PleaseHerLesotho https://t.co/iQJGfz0GpR

Consent and being allowed to change your mind is raised and of course the battle of ‘that’s not fair’ begins. #PleaseHerLesotho #PleaseHer pic.twitter.com/h4U0kEcro1

Another person talks about how not speaking about sex, even in queer women’s relationships, goes back to how we were raised not to talk about sex and engage with ideas of pleasure and sex. #PleaseHerLesotho #PleaseHer

Love of the spoke

Stolen 1000 giggles: Thinking on being a non-heterosexual African woman