“Down to f**k?”: Access to sex and the sexual desire of women

We live in a world of hook-up apps, kink and sex positivity, where everything from apps to social media allow us to have access to sexual knowledge and ideas. So why are women still being shamed for expressing their overt sexual desire?

Late last month, my friend sent me this message:

‘So then I sent him a message asking “DTF?”’

When I got it, I put down my phone and started a slow clap in my living room. The message showed that my friend had decided on what she wanted, and thus asked the man on the other end of the chat if he was ‘down to f**k’.

I’d like to vote for girls empowerment summit Sierra Leone GESSL for the female empowerment award.

This friend had been having what was in my opinion an incredible run in terms of sexual partners and was learning how to continuously upgrade her sexual techniques and experiences. This was, in part, because she was open to having sexual experiences of multiple kinds. Her education was being aided by several apps and other digital bells and whistles on her phone. With the Internet’s help she was practically becoming a sensei of sex.

Although we were very excited about how dope our friend’s interaction with the man in her life was, one question was raised within our group of friends: Is openly asking for sex a little too forward? Even when we have so much access to sex (thanks to social media and instant messaging), can we, as women, ask for the sex we want, when we want?

The Internet Changes the Game

We live in a world where, from WhatsApp to Instagram, from swiping right on Tinder to sending a Facebook message, people can get laid just by having enough data. Yet, despite the presence of sex-positive spaces, app-based hook-ups and even sex advice in magazines, national newspapers and on radio stations, the idea of a woman actively seeking sex outside the confines of love, marriage and relationships still makes society uncomfortable at best and belligerent at worst. This is conflicting. Shouldn’t the rise of the Internet make us more open to the idea of women wanting sex?

The idea of a woman actively seeking sex outside the confines of love, marriage and relationships still makes society uncomfortable at best and belligerent at worst.

Justin Garcia, a research scientist at Indiana University’s Kinsey Institute for Research in Sex, Gender, and Reproduction, has stated that there have been ‘two major transitions’ in heterosexual mating ‘in the last four million years’. The first was around 10 000 to 15 000 years ago in the agricultural revolution, ‘when we became less migratory and more settled, leading to the establishment of marriage as a cultural contract.’ The second major transition, he said, was with the rise of the Internet. However, it seems that technology has been unable to erase our prejudices.

In March 2017, the tag #ATLOrgy began trending among the primarily African-American users known popularly as ‘Black Twitter’, after a woman used the online platform to organise an orgy in Atlanta. However, many of the comments suggested that the women who would attend the event were ‘ho’s’ who wanted sex ‘too much’. Little was said about the hordes of men who paid the USD200 fee to attend the event. Even though the sex ‘was for everyone’ it was women who were being cast in a negative light. The event ended up being what could only be described as ‘a sausage fest’, as few women showed up.

The problem is this: Not only does this prejudice hold back women, who are told to be ‘the Madonna’ and not ‘the whore’, but it also impedes their partners’ ability to get a genuinely good shag.

To sex or not to sex? 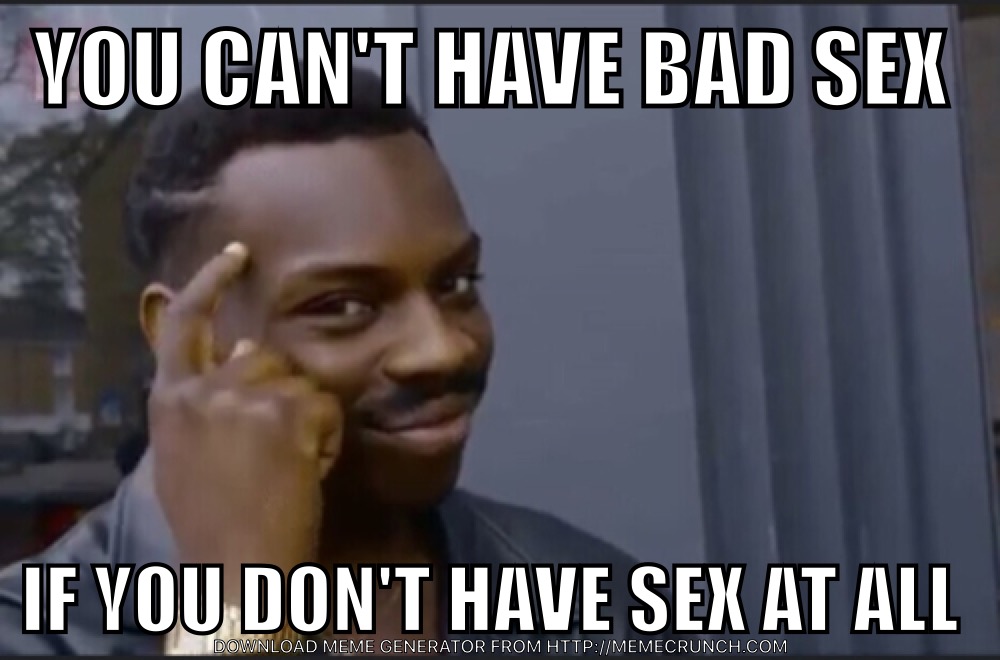 Women who have sexual knowledge of themselves could increase the repertoire of moves, tips and tricks that can be used in the bedroom. There are over 10 types of orgasm a woman can have. Some women love getting eaten out. There are sex positions that decrease the size of the vagina, allowing the man to last longer, that allow both partners to give great head, or even make the orgasms last all day. With enough research and conversation one could have sex so good that you can taste colours and hear flavours. However, if her experience is limited to the ‘Nando’s chicken’ and possibly doggy style on a wild day, it means that a whole host of sexual positions and experiences are taken away from both partners.

One friend regaled me with the story of how a night of experimentation led her to realise that switching between two different positions mid-action could provide crotch explosions for both her and her man. Her partner had always had his ‘faves’ but allowing his woman to try new things, rather than being upset or aggressive about her taking control, enabled him to add a move or two to his own portfolio.

Unfortunately, radio presenter and sexual health advocate Dr Tlaleng Mofokeng lamented during an interview for this piece, “When women have knowledge of their vaginas/sexual preferences/ reproductive health, they are said to ‘know too much’.” Some women fear the stigma so much that they will have ‘silent orgasms’ in order not to be judged by their partners for being ‘too into sex’. This phenomenon is so widespread that sexologists and feminists have identified an orgasm gap between men and women. Only 57% of women orgasm during sex, with some studies putting the number as low as 30%, while 75% to 95% of their partners orgasm.

It is time to squash some of the inaccurate sex myths that say that men only need to ‘bring a mandingo penis’, as if that would be the only centre of pleasure. These ideas not only greatly limit the types of pleasure both partners can experience, but also the role of women within the sexual act, making hers one of merely receiving sex.

The key to making sex better is to allow for sexual savvy on both sides; for both sides to be active, willing and engaged participants. The world’s reaction to a woman who says she is ‘DTF’ often is to shy away; to think that she is not worth pursuing sexually because she has ‘been around the block’.

We must begin to understand that women do have sexual desire. A great deal of evidence points to this, and the rise and rise of open-access sexual knowledge and conversationscontinues to show that.

Women’s pleasure is a core part of the sexual experience – but that can only come through sexual knowledge. Women need to be able to have the space to gather this knowledge and their partners cannot continue to act as gatekeepers. Having women know what good sex is will upgrade sex for everyone. Imagine the good times that could be had when we are all having orgasms rather than faking them in sex that is limited to a few thrusts and grunts.

This was first published on This Is Africa.

Another dope post is this one about being tired of bad sex, check it out. Like seriously, who isnt giving head in 2017?

Alternative: A Memory of Young Love

To You: An exploration of desire and her