I come from a country where being a lesbian could earn one life in prison. My girl friend and I have always been extra careful. We’ve never had the conversation about Public Displays of Affection (PDA) because for us, PDA is not an option.

It’s an unwritten rule that we are not allowed to show affection to each other in public, and we’ve always understood that the consequences of breaking that rule would be dire.

Since we cannot show affection to each other in public, we’ve always been very expressive in our private spaces.

It’s not strange for us to be in our room together and be holding hands or just hug each other out of the blue, and our closest friends have gotten used to seeing us squeeze into the smallest spaces together just so we can be next to each other.

Because of this ‘no PDA’ policy, we’ve also had to choose our friends very carefully.

We have a checklist that we go through before admitting anyone into our inner circle. This includes points like:

Choosing friends as a lesbian living in some African countries is HECTIC I tell you.

It took a very long time for us to tell our best friend Sheila that we were ‘together.’

My girlfriend and I were roommates in a university hostel and we shared a double room which came with two beds, but of course we only used one. On those odd mornings when we overslept and Sheila came down to wake us up, we’d jump out of bed ninja style and one of us would run and disorganize the other bed (to make it look like it had been slept in) while the other turned the TV around to face a central location as opposed to facing only one bed and grabbed night clothes for us to wear since we always slept naked. 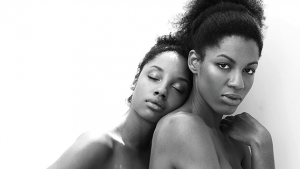 Eventually, we had to tell her because we spent so much time around her it was impossible to keep pretending. Plus she was the one person we were sure we could trust. When we told her Sheila rolled her eyes and said “you guys thought I didn’t know, puh leese!”

The fact that our best friend knew didn’t mean we had to stop hiding because we still had a lot of friends that didn’t know about us. There was one in particular, who I will call Shamim, that we couldn’t decide whether to include into our inner circle or not.

We had known Shamim since high school and we always hang out together because she was close to Sheila. We liked her very much and even trusted her but for some reason we assumed that because she is a devout Muslim, she would have a problem with our relationship.

One day, my girlfriend and I were in our room after a long day. She had just come in from a run and so she was in a sports bra and shorts while I was in a lesu. I always thought she looked so FINE in a sports bra and shorts with her flat tummy and all that sexiness so I waylaid her as she walked out of the shower to switch on the heater and began teasing her. I run my tongue over the side of her neck and kissed her lips only to back away when she started kissing me back. We kept playing like this with me looking into her eyes and coming in for the kiss then pulling back when she got into it. I went in for the kiss once more and my girlfriend froze looking behind me. I turned around to see Shamim closing the door and walking away!

Like most hostel rooms, our shower door was directly opposite the entrance to our room and I had forgotten to lock the door when my girlfriend came in after her run.

When she left, my girlfriend pushed me aside and run after Shamim.

She came back a few seconds later to tell me she couldn’t find her, Shamim must have disappeared into one of the many stair cases at the hostel. We agonized about the incident all night, ‘how long had she been standing there’, ‘how much did she see’, ‘who is she going to tell’, ‘why doesn’t that damned girl ever knock’!

The next morning, which was a Saturday, Shamim came to remind us that we were going swimming that afternoon and that she was riding with us. Nothing was said about the ‘incident’ and it has never been mentioned to date.

The only evidence we have that Shamim might have seen something that evening is the fact that she always knocks these days.

All she wants for Christmas is....

The Wildness Ep 15: What food should you be putting in (different parts of) your body?
14th August 2018